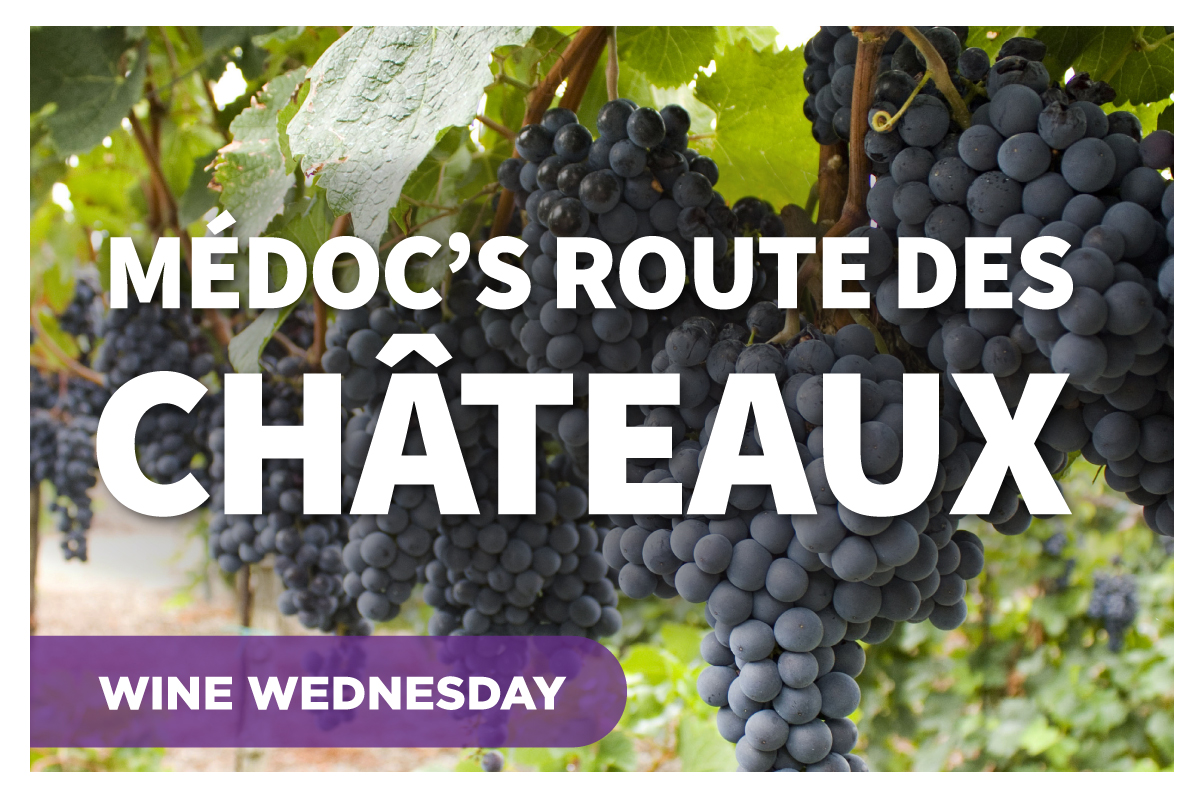 Time for another glass of Wine Wednesday! This series reveals wine gems scattered around the world, and shares quality recommendations along the way. This time, we’re zooming in on the Médoc wine region of France and discovering La Route des Châteaux.

La Route des Châteaux weaves among the Médoc peninsula’s four sub-regions: Saint-Estèphe, Pauillac, St. Julien, and Margaux. It translates into “The Road of Castles” and is also referred to as “La Départmentale 2” (or the D2 for a catchy title). The route’s vineyards pop with the prestigious homes of families who owned the property in the 17th century, back when Médoc was little more than swampland sandwiched between the Atlantic Ocean and the Gironde River.

Although Médoc’s swamp days managed a modest amount of vineyards, the land’s potential wasn’t recognized until the 18th century. Dutch engineers drained the land to achieve a quicker transportation of goods (i.e. more wine), and the less marshy foundation invited landowners to construct their mansions on it. The resulting châteaux are numerous, but hone individuality whether by style or wine-making process. A couple standouts include Château d’Agassac, a fairytale-like structure famed for its Cru Bourgeois of the same name, and Château Beychevelle’s wine quality is legendary because wine-makers continue to harvest everything by hand.

The most common grape used in Médoc is Cabernet Sauvignon.

Why It’s So Grape

Napoleon III instituted a classification system that ranked the wines’ excellence in the mid-19th century. The region’s best wines earned the Official Classification of 1855, an esteemed ranking wine-makers strive for. All but one of the red wines that earned the classification came from Médoc.

Cabernet Sauvignon maintains the most popularity when it comes to the grapes used among local winemakers. Merlot, Cabernet Franc, Petit Verdot, Malbec, and Carménère follow close behind and are used in different ratios throughout the sub-regions. While nearly all wine produced in Médoc is red, each sub-region achieves its own distinct taste.

Flyer for this year’s Marathon du Médoc. Registration is open.

A glass of wine is often associated with relaxation, but if you’re thirsty to experience the vineyards in a way unlike any other (and justify all that wine you’re going to drink), might we suggest planning a trip to Médoc in September when the Marathon du Médoc takes place? In the running (pun half-intended) as the world’s most colorful marathon, the Marathon du Médoc stretches its 26.2-mile distance between the southern tip of St-Julien and the northern tip of Saint-Estèphe.

Runners jog through 60 of Médoc’s beautiful vineyards and by 23 wine stations, serving samples of Médoc’s best pours. Numerous food stations feature pace-halting French cheese, steak, ice cream, bread, and oysters. Events surrounding the run flourish with more opportunities to taste Médoc’s quality wine. The prior night’s pasta party has been known as a risky precursor to race day. Overindulgence in wine and pasta is common; but you’re not running this race to PR, so go for it. It’s also common to see scads of participants in outrageous costumes relating to the year’s race theme (2018’s is “Amusement Park”).

Whether exploring the vineyards on wheels or on foot, call Jaya to design your ultimate wine tour today!