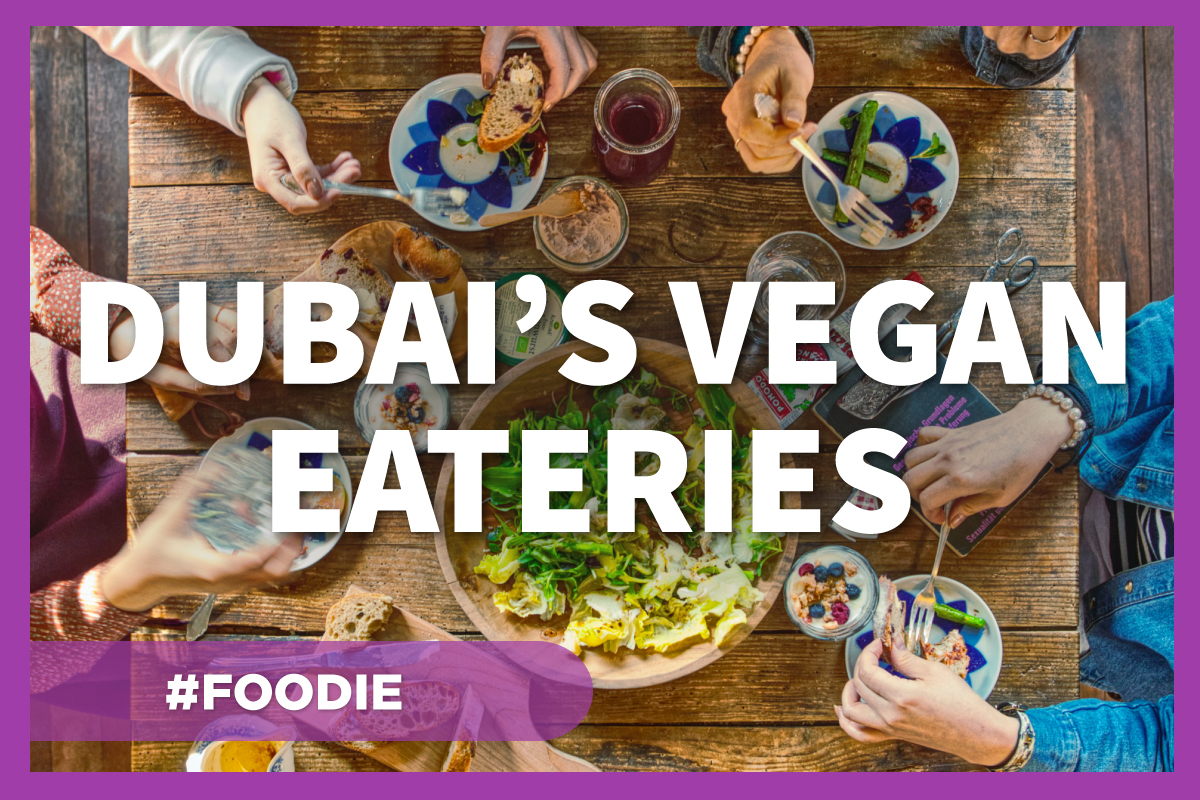 The following is barely a dent in Dubai’s full list of vegan restaurants. This is awesome news considering how difficult it once was to maintain a vegan lifestyle while traveling (let alone, any healthy regimen). Now, more and more vegan options are being added to menus not just as an option, but an attraction. Who wouldn’t be intrigued by a place that tops its crepes with something called “Unicorn Cream”?

Therefore, we’ve narrowed the list to must-try vegan restaurants near Dubai attractions. Whether you worked up an appetite surfing at Jumeirah Beach or walking Dubai Marina Walk, here are ideas of where to eat:

The Raw Place is a few steps up the road from Single Fin Café. Both a wellness brand and food shop, The Raw Place has GMO-free grab-and-go eats packed with healthy ingredients. The ingredients used to concoct refreshing smoothies and cold-pressed juices are organic, and the colorful curations of dishes like the Peanut Power and Island Bowl make what skeptics call “rabbit food” as mouthwatering as can be.

If you’re shopping the eclectic La Mer beachfront, stop at Life’n One holistic center for a bite at One Café. This space is an oasis flourishing with plants in mismatched pots, tree stumps that serve as either tables or seats, and canopy tents for some sweet shade. A rogue sign stating, “If you’re not barefoot, you’re overdressed” pays tribute to One Cafés hippie atmosphere. In addition to a full vegan menu that features Café One’s own interpretation of the usual vegan suspects (and its best-selling vegan Snickers Pie) are yoga and meditation classes.

“Clean comfort food for everyone” is enough to coax us through the doors of any of Dubai’s three Bareburger locations. The casual restaurant showcases the positive effects sustainability practices bring to a business. Each restaurant is unique because they are built with reclaimed and recycled materials.

Over one third of the menu is plant based and built to satisfy all appetites. They make their namesake burgers with a Beyond Burger, which achieves the savory characteristics of its meaty counterparts with pea protein, potato starch, and beetroot juice. Bareburger is a place where you can indulge in the comfort of familiar food with the knowledge that you are tasting and supporting practices that make the world a better place.

Burj Khalifa is an outstanding sight, but if you like your food scene more grounded than deluxe, a retreat to this trendy pub satisfies. Located at the Taj Dubai Hotel, the Eloquent Elephant is a British-style pub with a smart casual atmosphere. The presentation of the carefully crafted menu items is as captivating as the taste with eats like Elephant’s Barley Burger and sweet potato fries. The restaurant is a short city stroll from the Dubai Fountain, which has evening performances every 20-30 minutes starting at 6 p.m. Kick off a night on the town with dinner and drinks at the Eloquent Elephant!

In addition to being the home of the world’s tallest building, Dubai recently opened the world’s largest vegan restaurant, Veganity. It opened this past August, but its infancy to the food scene doesn’t lessen its popularity. More than 200 vegan dishes are on its menu including Jackfruit Burgers, Kung Pao Cashew, Vegan Steak, and vegetable tacos. View Veganity’s extensive menu and rose-colored interior on its Facebook page.

Is seeing a show at Dubai’s Coca-Cola arena part of your itinerary? Another Bareburger restaurant is nearby.

At the start of the Dubai Marina Walk, where the Persian Gulf begins to curve into the city, Copper Dog pub has established itself as the new local with a welcoming reputation and hearty vegan dishes. Copper Dog “veganizes” pub favorites, resulting in items like Cauliflower Steak and Roasted Veggie Sliders. The atmosphere is a casual reprise from the opulent city. The pub is laid back, but its menu shows Copper Dog is serious about letting its customers know what’s in the meals. Menu items are clearly marked and cater to every kind of appetite.

This casual cafe is located on the other end of the Dubai Marina Walk. Bounty Beets reduces its carbon footprint as much as possible by using a special composter that turns 100 kilograms of food waste into water and fertilizer. When morals aren’t guiding people to eat here, the menu items are. To clarify, this is the place that tops their Coconut Gluten Free Crepes with Unicorn Sauce! Bounty Beets graces its menu categories with titles as deliciously cheesy as their Cheesy Sweet Potato Fries. How can anyone resist nachos under Time for a Serious Relation-chip and veggie pizzas from Take a Pizza My Heart? Not us!

Ronda Locatelli’s Italian menu features a cornucopia of vegan dishes that silences anyone who claims “vegans can never enjoy the magic of cheese.” Chef Giorgio Locatelli created a menu with 40 vegan dishes featuring pizzas, pastas, ravioli, and desserts. The flavor packed into each meal renders diners mesmerized. The restaurant is the perfect place for family time, date nights, and outings with friends.

Topping the center of The Palm’s well-known shape is Barebuger’s third location in Dubai. It’s a perfect place to grab a bite if you’re taking the Palm Jumeirah Monorail.

Are you as hungry from reading this as we are from writing it? Call Jaya today to plan your vegan foodie tour of Dubai!