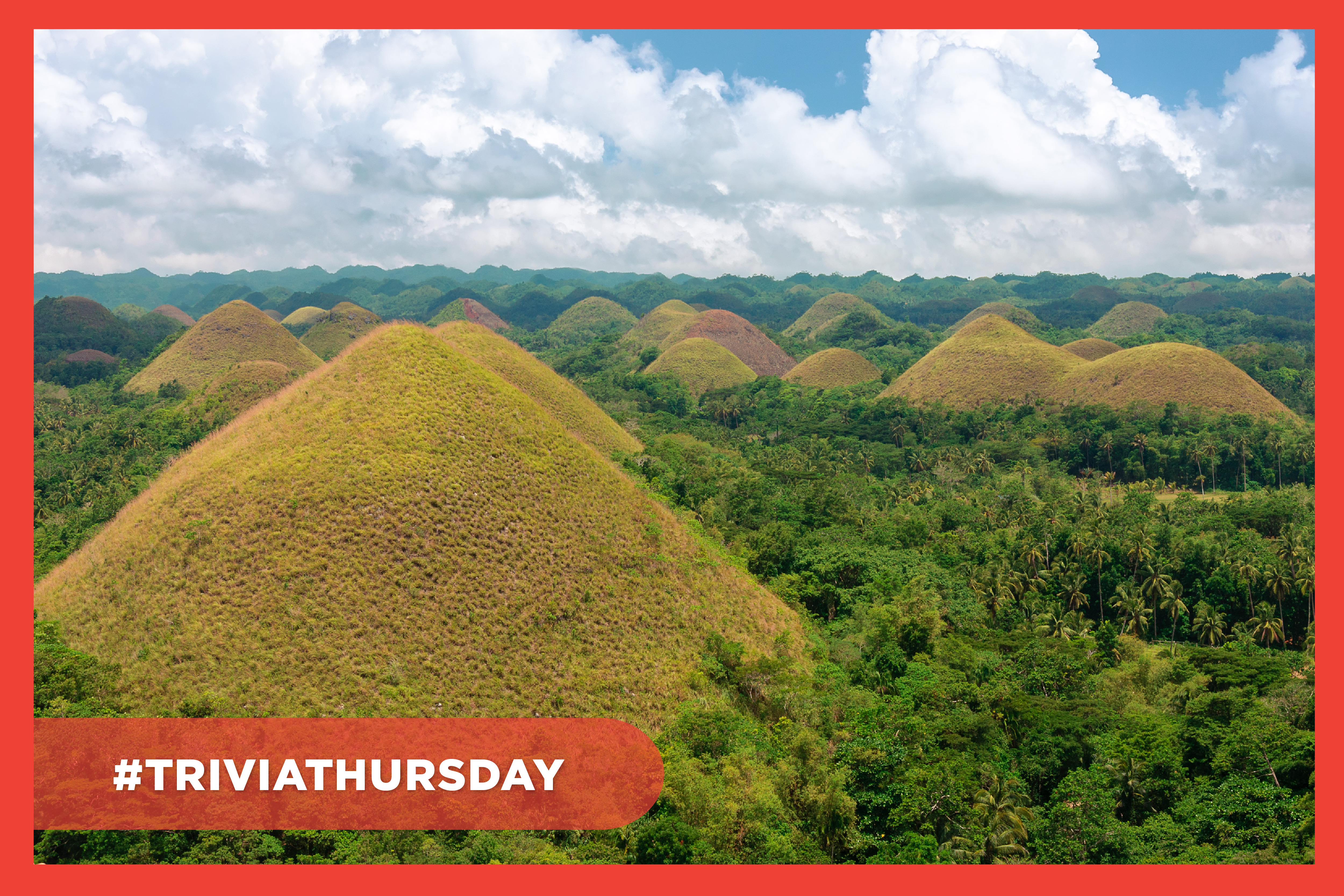 Ready to test your worldly knowledge? Today’s #TriviaThursday is asking you to name the famous hills in the Philippines’ Bohol province. Read the clues below and, when you think you have the answer, scroll down to see if you’re right!

They received their name because of the rich brown color they turn during the dry season (November through May).

They are depicted in the Bohol province’s flag and seal.

Despite their sweet-sounding name, these hills are not edible : ( .

The Chocolate Hills in the Philippines

Located on the Bohol province in the Philippines, the Chocolate Hills are a beautifully (yet deceivingly) named series of mounds protruding up out of the jungle. Like the clues mentioned, they received their name because of the brown color they turn during Bohol’s dry season (November – May). Although the dry season is responsible for their namesake, you can visit the Chocolate Hills year-round and be just as impressed.

The Legends of the Chocolate Hills

The Filipinos have three legends to explain how the Chocolate Hills were formed. Whichever you believe is entirely up to you.

The most popular says the 1,700 individual hills are remnants of a battle between two giants. They spent days throwing boulders at one another, littering the battlefield with scads of colossal rubble.

Exhaustion came before any resolve, and the two ceased fighting in favor of becoming friends and running off together. The mess they left behind became what we know as the Chocolate Hills.

The hills’ scattered positioning over the vast landscape lends evidence to such an occurrence, but not enough to sway who believe they are actually dried giant’s tears. The second legend is of the romantic genre and tells the story of Arogo the giant and his mortal crush, Aloya. Arogo fell hopelessly in love with Aloya and was devastated when her human life came to an end. He wept for eternity and the teardrops dried into the Chocolate Hills.

The third is less tragic, but arguably more disturbing as it suggests the hills are the dried feces of a monstrous water buffalo. The animal ate all the surrounding towns’ crops, causing severe famine. The townspeople developed a plan to place rotten food in the buffalo’s path. The gluttonous monster ate it and suffered horrendous side-effects that he unleashed all over Bohol. The “side-effects” dried and became the Chocolate Hills.

The infinite bumps cover an area of 50 square kilometers and continue into the horizon. The spectacle has many advocating for it to be the “Eighth Wonder of the World.” This isn’t the first time the Philippines’ natural wonders have earned this nomination. The Mayon Volcano in the Bicol Region and the Banaue Rice Terraces in Luzon have also been referred to as Eighth Wonder(s) of the World.

If you’re interested in seeing the Chocolate Hills or hopping from one Wonder of the World to another, call Jaya Travel! Our savvy agents know the best of the Philippines and will make sure you get the trip you crave at a price you can afford.