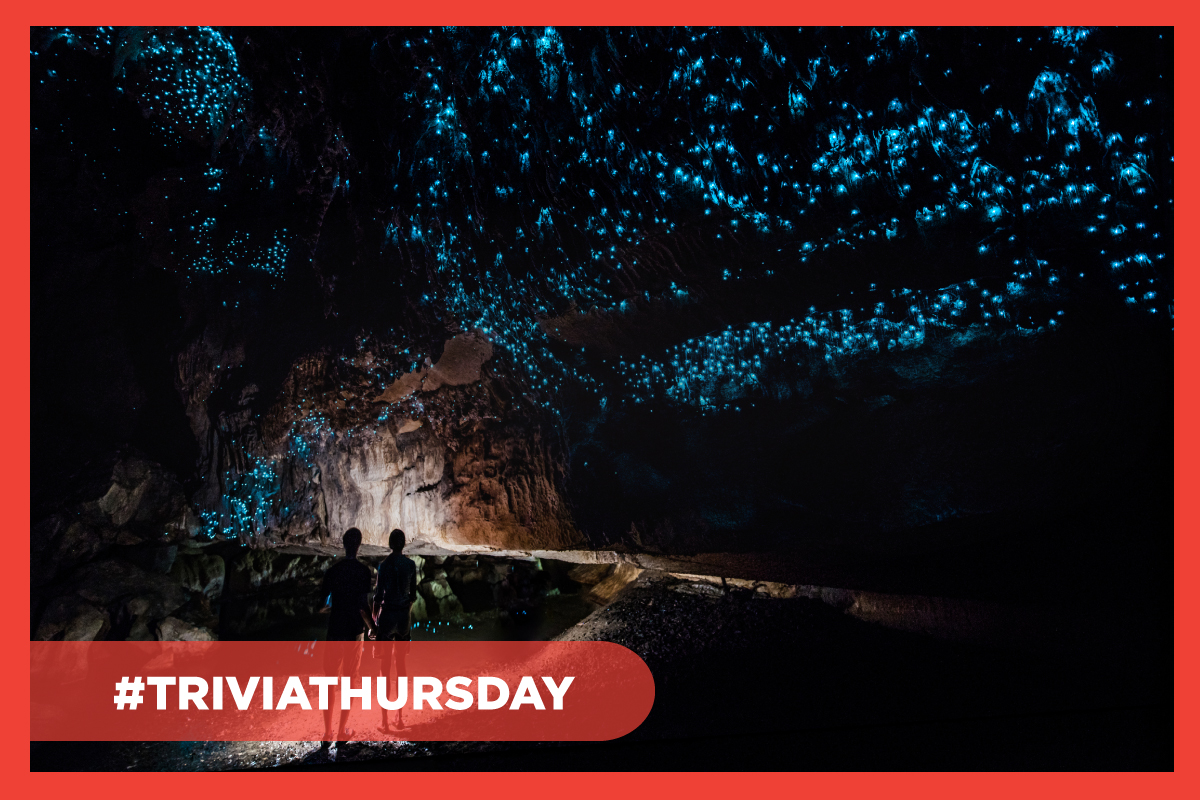 Ready to test your travel knowledge? Today’s Trivia Thursday takes us to a mysterious underground realm unlike anywhere else on Earth. Can you name this famous landmark? Read the clues and when you think you’ve got the answer, scroll down to see if you’re right!

The mysterious blue lights you see here may resemble the night sky but their cause is from an unlikely source right here on Earth: glowworms!

To get to this incredible landmark from the US, you would need to fly for 16 hours.

The best way to see this landmark’s glowworm phenomenon is on a boat tour.

Can you name this famous landmark?

Located in the heart of New Zealand’s north island, these impressive caves are illuminated by Arachnocampa luminosa, a species of glowworms native exclusively to New Zealand.

The name of the caves is derived from the local Maori people. “Wai” meaning water and “tomo” meaning entrance or hole. The local Maori people have known about the underground cave’s existence for at least a century. In the 1880s, it was shown to Western surveyors for the first time and quickly became a popular tourist destination. In recent times, ownership of the cave and surrounding lands were given back to the local tribe. In fact, many of the employees are descended from Chief Tane Tinorau, the original chief who helped explore the cave.

Thirty million years ago, the cave was carved out of limestone that once sat upon the ocean floor. In addition to the glowworms, visitors will be treated to many fascinating geological formations as well. The Cathedral section of the cave is a chamber that stands 18 meters high and has such good acoustics, it’s attracted dozens of singers and choirs to perform underground.

The bioluminescence in the worms is similar to the chemicals fireflies use to glow. The glowworm larvae use this bluish light to attract other bugs in the cave. These unfortunate critters then become trapped in the sticky strands. Luckily for you, the strands don’t hang far enough down from the ceiling for you to bump into them.

When to visit Waitomo Glowworm Caves

The visitor center offers boat tours year round, except for Christmas, and glowworm activity is visible at all times. It’s pitch black after all, so you won’t have trouble seeing them. However, if you really want to be blown away, visit during the month of December when the number of glowworms is highest.

Want to see the glowworms for yourself? Call Jaya! We’ll arrange the perfect New Zealand trip so you can see glowworms in all their blue glory!