Quizzes: Do You Know These Cathedrals? 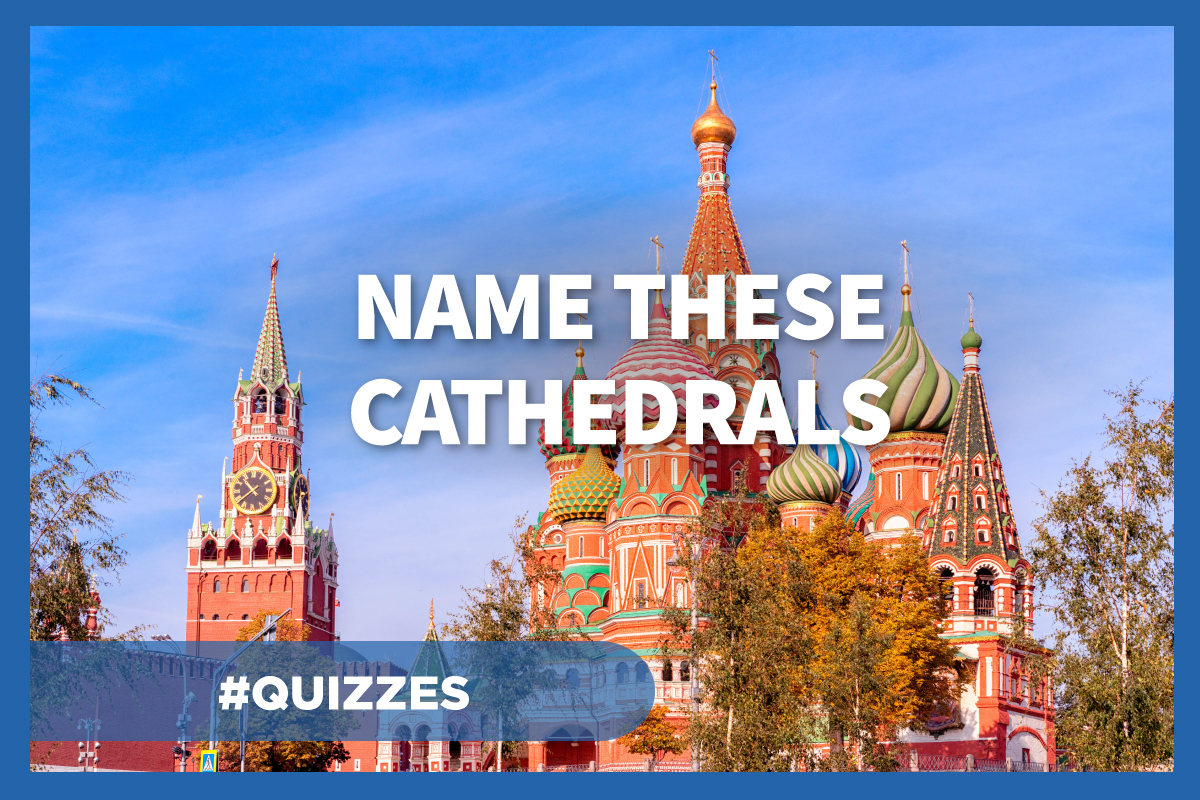 It’s time for a little cathedral quiz in this latest edition of our #Quizzes segment! Below are six photos of the world’s must-visit cathedrals. If you can’t guess it by the image, read its description for more clues.

1. Renowned Catalan architect, Antoni Gaudi, jumped on this design project in 1883, and actively worked on it until his death in 1926. This cathedral remains unfinished, but its completion would make it the tallest cathedral in the world.

2. This cathedral is located in a town nicknamed “Rome of the North”. It was built in 340 AD and has been evolving since, with numberless reconstructions and additions. Not only is it known for having scads of religious art within its walls, but it’s also said to hold the nails used on Jesus Christ during the crucifixion.

3. Located in Istanbul, this was the largest cathedral in the world at the time of its creation in 537 AD. It started as a patriarchal cathedral, then an imperial mosque before it became one of Turkey’s most visited museums in 1935.

4. This might be an easy one for some, but getting its postal address correct isn’t as simple. Home of Michelangelo’s Pieta and Bernini’s Baldacchino, this cathedral is located in Vatican City, not Italy.

5. This cathedral owns any claim that “all cathedrals look alike.” Designed by Oscar Niemeyer and located in Brazil, it serves as the Seat of the Archdiocese of Brasilia.

6. Would you guess that this cathedral is located in Russia? What makes it more fascinating than its look is that it didn’t reflect any other Russian or Byzantine architecture of the time. It was designed to resemble a bon fire flame rising into the sky.

Construction of Sagrada Familia began one year prior to when Gaudi was put in charge of the project. The first architect to receive the assignment was Francisco de Paula del Villar y Lozano. However, after disagreements on design, Villar dropped out and the task was picked up by Gaudi.

Gaudi softened the tall, gothic-style columns with the curved forms of Art Nouveau architecture. It’s said to be designed entirely from Gaudi’s imagination and represents the history and mysteries of Christian faith. After Gaudi’s death in 1926, construction toggled between “slowed” to “halted”, relying on charity funding to move the project along. Although it is technically incomplete to this day, it is a sight to behold. Workers and contributors are aiming to complete the cathedral on the 100th anniversary of Gaudi’s death.

The castle-like Trier Cathedral is a top attraction in the enchanting German town of Trier. Construction began in 340 AD, but Trier Cathedral endured a lot of destruction and resurrection during the Middle Ages. Its lifetime through multiple eras – represented in its Gothic, Roman, and Baroque elements – has contributed to its unparalleled collection of religious artwork and relics.

Aside from housing the Holy Nail that held Jesus to the cross, it also holds the Seamless Robe of Jesus. This robe is said to be the one Jesus wore prior to his crucifixion. It is shown to the public on a very limited basis.

As described in its clue, Hagia Sophia has served a number of critical roles since its creation in 537 AD. It held the status of “world’s largest cathedral” until 1520 when Seville Cathedral was built in Spain. Still, it receives thousands of visitors every year as Turkey’s most popular museum.

Hagia Sophia is regarded as a perfect blend of the Byzantine and Ottoman Empires. Among the artifacts on display are a series of notable doors, each with tales from their heyday: The Marble Door was used by church council participants entering and exiting Hagia Sophia’s meeting chambers. The Nice Door dates back to the 2nd century BC, making it the oldest element in the church. The Emperor Door is the biggest door in the cathedral and, as its name suggests, was used only by the Emperor.

Saint Peter’s Basilica is probably the most popular and well-known on this list (notice we didn’t include Notre Dame). Its location is significant because it’s believed to be above Saint Peter’s tomb. This was determined by archaeologists who uncovered fragments of human bones at the site in 1939. There’s no way of knowing for sure if these were the remains of Saint Peter, but scientists confirmed the bones are those of a 60-year-old man; the age Peter was when he died. Purple threads of fabric were found intertwined in the remains, suggesting these bones belonged to an important figure.

In addition to being the alleged burial site of Saint Peter, the basilica houses the immensely valuable and precious artwork of Michelangelo, Pieta, and Bernini, Baldacchino. Saint Peter’s Basilica is one of the holiest places in the Christian faith.

5. Cathedral of Brasílía in Brazil

The newest cathedral on our list, Cathedral of Brasílía’s construction started in 1959. This cathedral looks starkly different from its fellow religious buildings. Only the roof, made from 16 long fiberglass components stretching from a circular base toward the center before changing direction toward the sky,  can be seen when standing outside at ground-level.

When visiting, people enter through a dim, underground tunnel that travels beneath the cathedral’s encompassing reflective pool. The cathedral’s interior greets them with a spacious room saturated in natural light. Seeping sun rays adopt shades of blue and green as they shine through the stained glass roof.

Saint Basil’s Cathedral is seen as a symbol of Russia and it is situated in the center of Moscow’s Red Square. The vibrant colors were incorporated many decades after it was built. Like the clue mentioned, the cathedral draws a particular fascination because its design was not reflective of the country’s architecture, making it an imaginative and unique building.

If you didn’t know these cathedrals before, you certainly know them now! Which would you like to visit? Jaya can get you the best airfare to any of them, plus introduce you to cool things you can do while you’re in the area. Call today!