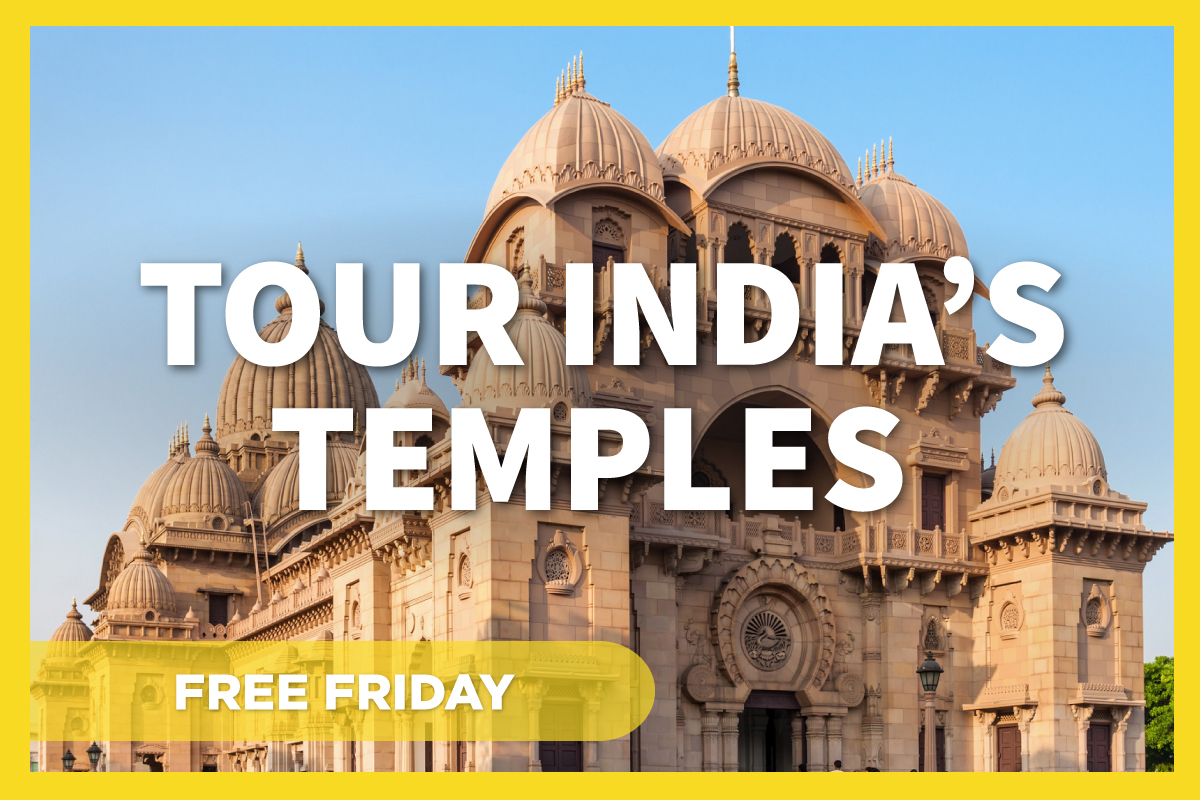 T. G. I. Free Friday! This series aims to answer every frugal traveler’s question: “What can I do for free while I’m here?” If touring a temple interests you, keep reading. We’re pointing out some of India’s gorgeous temples you can explore without paying an entry fee.

There are countless temples in India, so we’re focusing on a couple found in the country’s most visited areas: Delhi, Mumbai, Bangalore, and Kolkata. The following temples are open to all visitors, regardless of religion, and are free to enter:

Mahatma Ghandi inaugurated the Laxminarayan Temple under the condition that all social classes were allowed to enter.

At risk of leading you down a path well-traveled, don’t miss visiting the Laxminarayan Temple in Delhi. While this temple is a popular tourist attraction, it’s unique in that it was inaugurated by Mahatma Gandhi in 1939, who ensured visitors of all social classes could enter. The temple is dedicated to the goddess of prosperity, Laxmi, and the preserver, Lord Narayana.

The Lotus Temple’s design is unlike any other temple in India.

Seeing the Lotus Temple ignites massive appreciation for the dynamic designs temples can take. Truly one-of-its kind, the Lotus Temple has nine entrances formed by huge marble “petals” that fold toward the sky to resemble the—you guessed it—sacred lotus flower. The interior is just as stunning, as the petals’ underbellies create the magnificent and captivating ceiling of the Lotus Temple. As a house of the Bahá’í faith, all religions are allowed inside. Prayer times, each indicating a different religion, occur daily at 10 am, noon, 3 and 5 pm.

The Kwan Kung Temple is the only remaining Chinese place of worship in Mumbai. Its location is deemed a hidden gem for the vibrant Chinese history that existed before the Sino-Indian War drove many out in 1962.

The temple is located on a small, unnamed lane off of Mujawar Pakhadi Road and nestled in a two-story house. The subtle entrance contrasts India’s other pronounced temples, but it radiates a welcoming vibe. The temple occupies the second floor and is adorned in rich red hues, paper lanterns, Chinese art, flowers, statues, and an alluring red alter framing a painting of Kwan Kung; the Chinese god of justice, protection, and courage.

It’s likely that you’ll have the temple to yourself when you visit, other than the mother/son caretakers who reside below; however, the small space becomes a venue for celebration during the Chinese New Year and Moon Festival, hosting hundreds of visitors throughout the day.

The ISKCON Temple in Mumbai presents an immersive opportunity. The property’s four acres include a guest house, restaurant (said to be delicious), bakery (also delicious), library, auditorium, and spaces for prayer. ISKCON stands for International Society for Krishna Consciousness. The movement is guided by the teachings of Lord Krishna and recognizes religion as a unifying quality.

While this temple is a must for those seeking inner peace, past visitors preach an even higher priority is trying the Prasad. Prasad is a vegetarian food eaten after worship and served in the temple’s bakery. Entering the temple is free (#freefriday), but keep some money on you for food or souvenir purchases—this place really has it all!

According to legend, the 65-foot statue of Lord Shiva was made without the use of a blueprint or measuring tape.

Around 1994, a man named Ravi V. Melwani had a vision to build a large Lord Shiva statue to serve as a space for people to find hope, faith, and belief. Despite lacking funds and land to execute this task, a spot off Old Airport Road transformed into the site of Shivoham Shiva Temple in a matter of months. It’s said the sculptor, Kashinath, created the mesmerizing 65-foot statue of Lord Shiva without the use of a blueprint or measuring tape. Its perfect proportions and details, like the scaly serpent around the neck and the flawless trident held in one of Shiva’s four hands, makes the legend impossible to believe. However, when you’re at the folded feet of a 6-story statue representing belief and faith, that kind of magic seems possible.

The temple now harbors the teachings of Shivoham, a mantra preaching the unity of all creation: I am Shiva. You are Shiva. We are all Shiva. On Mondays, Shiv Aartis (worship rituals) take place every two hours and a light and sound show occurs nightly at 8 pm to illustrate spiritual diversity.

The full-colored faces peering into the horizon makes this one of India’s more exotic temples. © Shrungagiri Sri Shanmukha Temple Facebook

As you look from the bottom of Shrungagiri hill, large faces protruding from the horizon draw you closer. The Shrungagiri Shanmukha Temple honors the great mythical warrior Shanmukha. Six large stone faces resembling Shanmukha crown the temple’s roof and leave visitors awestruck at their size and beauty. The faces are carved in hypnotizing detail and rich in color—each decorated with an intricate gold necklace, painted rosy lips, and jet black hair curling from under the hat.

A crystal dome rests atop the hats and absorbs sunlight throughout the day. When the sun sets, the dome’s crystals glitter with LED lights and the phenomenon attracts visitors around nightfall.

A blend of Christian, Islamic, Hindu, and Buddhist architecture results in the majestic Belur Math. It resembles a mosque, temple, or a church depending on which angle you view it. The designer and architect intentionally styled the temple to symbolize the unity of all religions.  Visitors from all spiritual and physical positions are invited to explore its 40 acres.

The Belur Math Temple is also considered headquarters of Ramakrishna Movement. The mission involves doing selfless work with dedication to God, an example being “in serving the poor, you are also serving God.” Located in backpacker-loved Kolkata, the temple’s inclusiveness and acceptance attracts people from all over the world to relish the architecture and feel a sense of peace in its presence.

The Calcutta Jain Temple is one of the most ornate and colorful temples in India.

The Calcutta Jain Temple is an example of the elegant detail and intricate construction architects are capable of, many moved by spiritual calling. The beauty tour of this temple begins from the outside, surrounded by deliberately placed gardens, ponds, fountains, and walkways. Ensure your best experience by taking your time when you visit—Calcutta Jain Temple is not one you want to rush through.

India is home to scads of temples. Focusing on eight doesn’t begin to cover the thousands of glorious designs and colors you’ll see. Your Jaya agent can help define your search and connect your visits with nearby activities that fit your #freefriday budget.