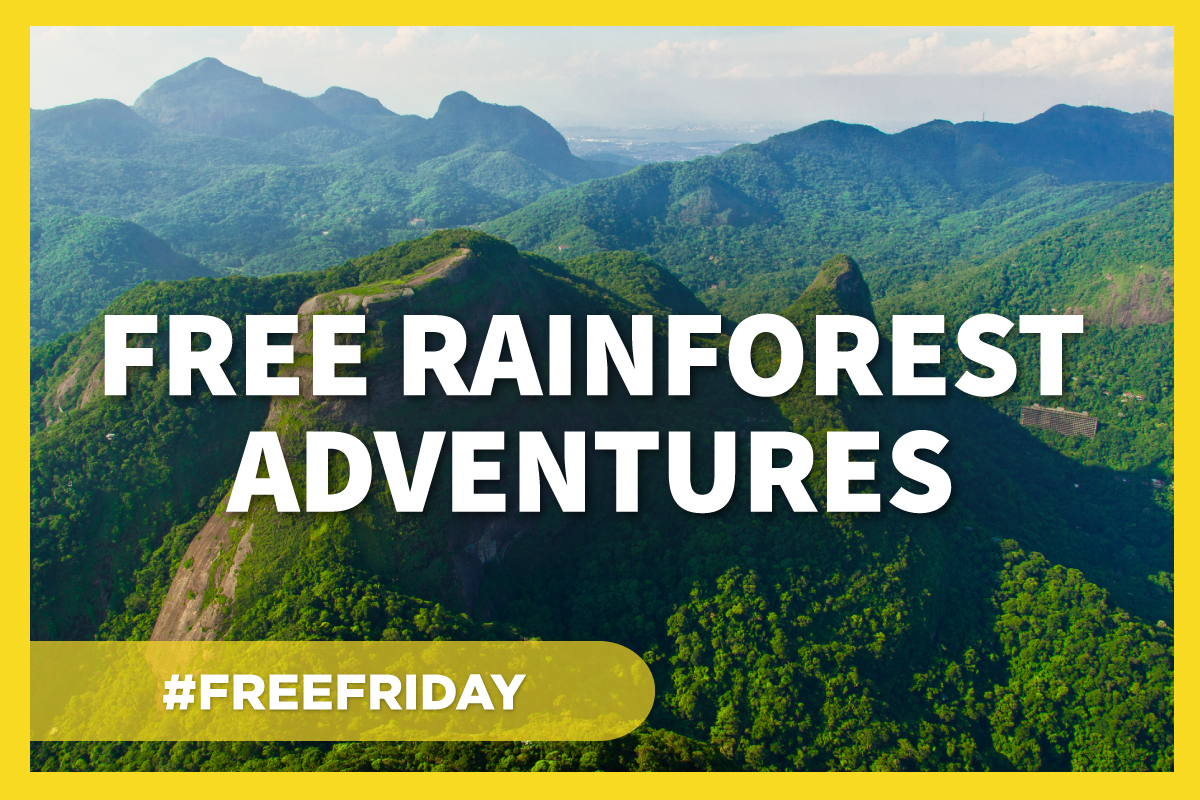 Hurray for Free Friday! In a world where everything seems to come at a cost (we’re looking at you, theme parks and health care), free access to a network of trails weaving through Brazil’s most beautiful rainforest is unprecedented! Lace up your hiking shoes for Tijuca National Park in Rio de Janeiro, Brazil!

Tijuca Forest’s vast canopy and inventory of exotic plants contradict images that come to mind when we think “man-made.” In truth, the vegetation that saturates Rio de Janeiro with every shade of green is the result of a major reforestation project carried out between 1861 and 1888.

Rio’s original forest was destroyed in favor of space to grow sugarcane and coffee plants. The lack of trees eventually took its toll, and Rio found itself with a dangerously low water supply. Luckily, Major Manuel Gomes Archer launched the largest tree-planting project the world had ever seen. Over 100,000 trees were planted in the next 13 years, and Tijuca Forest made a triumphant return. The city continued to grow, only this time trees and plants weren’t excessively pulverized to make room for new developments. Tijuca was declared a national park in 1961 and is also known as one of the world’s largest urban forests.

The following hikes have trailhead parking and the longest one (Pedra da Gávea) is a day hike, so neither requires provisions for a multi-day excursion.

As the highest point in Rio, Pico da Tijuca gives you the best bird’s-eye view of the whole city.

At 3,353 feet, Pico da Tijuca (Tijuca Peak) is the highest point in Rio. The summit gives you the best 360-degree views of the world below. Getting to the trailhead by Estrada da Cascatinha road (via Uber or taxi) brings you by the Capela Mayrink (Mayrink Chapel), a hard-to-miss pink structure built in the mid-1800s.

It’s worth stopping at the visitor’s center ahead to arm yourself with a map and check in with knowledgeable rangers. There are scads of foot trails branching from the main road that can easily weave you away from your goal summit. For the 2.5-hour hike everyone raves about, park/get dropped off at the Pico da Tijuca trailhead (free parking!) at the end of Estrada Major Archer. While you won’t risk spending days wandering in the jungle, you’ll see a lot and still have time to hike Pedra Bonita if you’re up for it.

Pedra Bonita is a popular launching point for hang gliding and paragliders.

Meaning “Beautiful Rock,” summiting this monolith takes the least amount of effort, yet delivers magnificent reward at 2,274 feet. There’s trailhead parking (free!) at the base off Estrada da Canoa, and most of the ascent is on a paved road. Pedra Bonita is a favorited launching point for paragliders and hang gliders, as it allows them to reach a sturdy high point without compromising stamina.

The hike takes up to an hour and achieves similar views to those you’d see at Pedra da Gávea’s summit without requiring as high of a fitness level. If you’re less interested in the journey and more interested in the panoramic views at the top, Pedra Bonita is for you. Even if you’re looking for a true challenge, don’t sidestep this short hike. It yields a great glimpse of Pedra da Gávea’s mysterious face formation on its side that you won’t be able to see when you’re on top of it.

Viewing Pedra da Gávea from atop Pedra Bonita reveals a face in the monolith’s side.

Pedra da Gávea’s summit is southeast of Pedra Bonita and overlooks the ocean shoreline. The trailhead (more free parking!) begins at the east side of the Barra da Tijuca neighborhood and  is a mere 6-hour hike to the top. You don’t need climbing equipment for this perfectly challenging day hike, but you can look forward to a section where you’ll have to scramble up rocks to reach the 2,769-foot summit. Its proximity to the ocean supports claims that this is where you see the most extraordinary views of Rio.

Despite its difficulty, everyone who has hiked Pedra da Gávea says it’s a must. The top is huge and, once you’ve accomplished this feat, there’s no rush to get down. Take your time while you’re up there; you’ve earned the rest, after all! Jutting ledges and remarkable cliffs set the stage to photograph your victory. This is certainly something you’ll want to remember.

Among Tijuca’s intriguing qualities are the manmade relics among its dense jungles. These monuments are accessible by hike, bike, or vehicle.

Off Estrada Dona Castorina road is a large oriental pavilion overlooking the city called the Vista Chinesa. It’s 1,247 feet above sea level and offers a postcard-perfect view of Rio along with a testament to the area’s Chinese history.

Vista Chinesa overlooks the city of Rio at 1,247 feet.

Less than one mile West of Vista Chinesa is another remnant with fascinating history. Mesa do Imperador (the Emperor’s Table) is a long slab of concrete over a line of four sturdy legs. The emperor and his court used this stone table as a gathering place, but the year of its heyday is unknown.

Tijuca National Park achieves multiple travel goals in one trip, and its location in Rio makes it accessible to all. Work with Jaya Travel to coordinate your Brazilian visit with your bucket list and budget. Call today!

This could be you! Call Jaya!