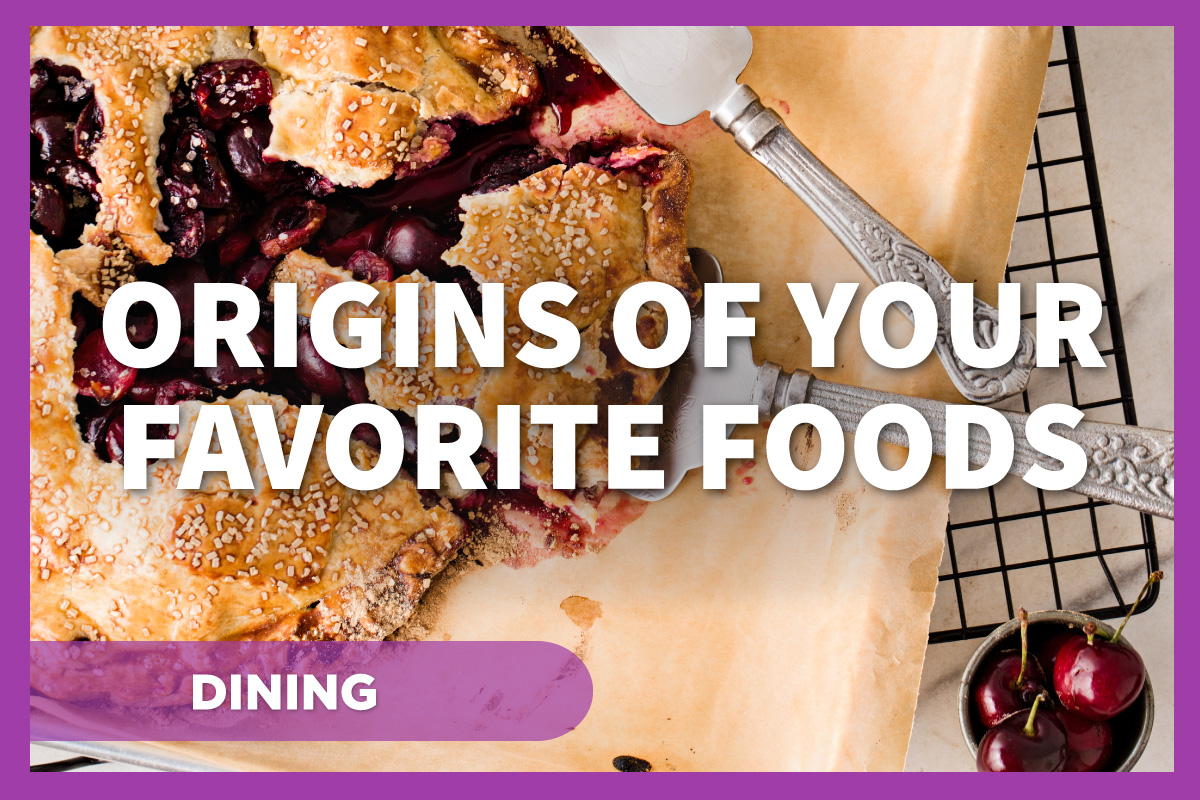 Picture the food crowding the dining table on any given American holiday. Fourth of July is abundant with barbecue. A typical Thanksgiving feast is an imbroglio of comfort food and scads of pies. Pizza is a party fare staple. Interestingly enough, the most common items on the American food menu aren’t American concoctions. Grab a snack and read about the origins of your favorite foods!

The ingredients topping the Margherita pizza were intentionally chosen to represent the Italian flag.

It’s not shocking to learn pizza originated in Italy, but its existence precedes what the popular legend suggests. Creative credit is usually given to Raffaele Esposito, who made the Margherita pizza for Queen Margherita’s visit to Naples in 1889. Tomatoes (red), mozzarella cheese (white), and basil leaves (green) topped the hand-pressed crust and represented the colors of the Italian flag.

The legend isn’t unbelievable and this event may have taken place, but it wasn’t the world’s introduction to pizza. Historians connect it to the Greeks and ancient Egyptians after finding text that described using bread as a plate. Romans often added flavorful toppings to a flat bread called “focaccia,” so the idea of pizza wasn’t really a novelty by the time Queen Margherita visited. The introduction of tomatoes, however, came later and pizza’s American appearance is as recent as post-World War II. Since then, we’ve used pizza as an edible canvas for all sorts of creativity.

Where to try: Antica Pizzeria Port’Alba in Naples, Italy

Pie’s crust was used as a baking dish/storage container, making it hard and virtually inedible.

The phrase “American as apple pie” leads us to believe ‘Merica is the mastermind behind the pastry-cased dessert. Although much of pie’s evolution took place in North America, the defining game-changer occurred in Greece.

Early pies were made up of savory meats enclosed in a tough outer shell. This indestructible shell was built for function, not edibility. Made by mixing flour and a hard lard called “suet,” the casing served as a baking dish/storage container. A lot of food was served like this, so all meals hundreds of years ago were technically pies. The Greeks took the tradition to the next delicious level by creating the recipe for the pie pastry. The pastry was effective at sealing in meat juices and was a tasty addition to the meal.

The recipe spread in Europe and adaptions were made based on ingredients available. When the English brought the recipe with them to America, the Native Americans pointed out fruits and berries that could be cooked inside, thus promoting pie’s capabilities as a dessert.

Where to try: Ariston Bakery in Athens, Greece

Although the Scots fried chicken in fat, the absence of spices left it rather tasteless.

Popeyes, Kentucky Fried Chicken, and Chick-Fil-A beginning in North America’s southern states implies fried chicken’s origins are as southern as the contraction, “y’all”. Surprisingly, its roots start in Scotland. Rather than be influenced by their English neighbors, who baked or broiled their chicken, the Scots hastened the cooking process by frying the meat in fat. Dependence on the availability of fat along with spring chickens made fried chicken a delicacy. It was expensive and served only on special occasions.

While Scotland honed their technique of frying chicken in fat, those in West Africa had a different style. Africans battered their chicken, cooked it in palm oil, and seasoned it with spices. These methods remained thousands of miles apart until both groups immigrated to the United States. Scotland’s fat-fried chicken combined with spices African slaves incorporated made for a delicious meal that could travel and keep well in the South’s notorious heat.

Fried chicken became popular in America between the abolition of slavery and the Civil Rights Act of 1964. Because segregation banned them from restaurants, fried chicken was a go-to meal for African Americans, who were skilled at raising chickens and achieving mouthwatering flavor.

Where to try: Max’s Bar & Grill in Glasgow, Scotland

Barbecue is a popular cooking style at large-scale events because it allows tons of food to be cooked at once.

The word “barbecue” refers to the cooking method, type of meat used, or an outdoor social event; so, of the foods we’ve named, this one has the most ambiguity. Cooking meat aligns with the discovery of fire, making it impossible to applaud anyone in particular for barbecue’s invention. However, etymologists (those who study word’s roots), believe it originates from the Caribbean islands due to its resemblance to the Arawak word “barabicu.”

The Spanish called it “barbacoa” when they visited the Americas for the first time. They found convenience in the natives’ way of cooking meat on large, wooded slabs. This method allows tons of food to be cooked at once, which came in handy when feeding large groups of Spanish explorers. That same convenience is the reason barbecue is commonplace at present-day events with a large guest count.

Where to try: Fonda Paladar La Paila in Havana, Cuba

Although McDonalds sells three of these four foods (#RIP McPizza 1980s-200s), there are better options out there. We’ve recommended places in each food’s homeland, but no one is going to know where to go better than Jaya Travel. Call today for the lowest fares to your next meal abroad!